This post is by Research Data Management Advisor Eleanor Warren

This year was the 25th International Medieval Congress in Leeds, and having experienced over a decade worth of IMCs myself, I have seen how the Congress has grown and developed. Most noticeably in its move to the University of Leeds main campus, from the dual sites of Boddington and Weetwood Halls, and with that, the introduction of ‘Making Leeds Medieval’, opening up the field of medieval studies to the public.

Being more open was also a theme I was excited to see within the academic sessions and workshops this year. Whilst Special Collections opened their doors and showcased some of their most beautiful manuscripts in the flesh, I attended a number of sessions on digital humanities, covering digitisation, preservation, open platforms, and digital tools for research.

On Tuesday afternoon the IMC introduced a Wikipedia workshop for the first time, ‘#MedievalWiki: Editing Women in Wikipedia’, organised by Dr Victoria Leonard and Sukanya Rai-Sharma. It was delivered by Dr Kate Cook who gave a friendly and straightforward introduction to Wikipedia editing, making it all seem a lot less scary out there in the WikiSphere than I had feared. This included guidance such as not contributing original research material to Wikipedia, because as a tertiary source, all content must be verifiable and cited with reliable, published sources. This might seem challenging to Wikipedia editors who are historians, or indeed academics in any field, who are trained to write in an analytical way, providing argument and opinion, and who are wanting to disseminate their research to a wide audience. But Wikipedia provides guidance on the use of reliable sources, and content must be statements, not opinions. So save your opinion pieces for a blog post instead!

Women in medieval studies are under-represented on Wikipedia, so the editathon addressed this gender imbalance by giving attendees the opportunity to register as Wikipedia editors and begin editing and creating pages for notable female medievalists. From one perspective, those no longer living are easier to work with – obituaries are good sources for Wikipedia!

I began tentatively editing the Wikipedia page for Professor Miri Rubin, but did come across the stumbling block of finding reliable sources of information to cite – or at least in the 20 minutes or so I was grappling with trying to edit. If and when I have the time, I’d like to come back and try to add to her page. 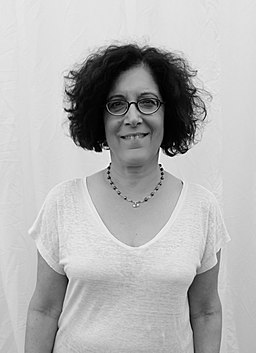 This situation in itself exemplifies Victoria Leonard’s point that ‘the burden of this labour is falling on the shoulders of precarious, under or unemployed, early career women as facilitators and contributors’. But I am pleased to see that this photo of Professor Rubin was taken and uploaded to her Wikipedia page during the IMC. Read Victoria’s blog post about the #medievalwiki and a related #wccwiki event.

Following on the digital humanities theme, I attended the session ‘Researching, Digitising, and Curating Complex Manuscripts’, chaired by Professor Emilia Jamroziak from the Institute for Medieval Studies at Leeds. All three speakers were from the University of Glasgow. Andrew Prescott opened by introducing IIIF (International Image Interoperability Framework), which enables us to research manuscripts in new ways, for example by comparing manuscripts in different libraries side by side. But the potential of IIIF is currently limited by the extent of its implementation by libraries and the number of manuscripts available in this form. IIIF viewers can be used to annotate manuscripts, and the annotations can then be downloaded, but there are conversations to be had about where to go with this next, such as how to share these annotations. We are now moving away from what have essentially been digital facsimiles, and we want digital manuscript tools to be able to do much more.

Using IIIF viewers to annotate manuscripts, which can be downloaded. Conversations to be had about where next. Sharing annotations? Moving away from what have been essentially digital facsimiles. #s1024 #IMC2019 pic.twitter.com/rE5wFiI8ca

Joanna Tucker continued the panel discussion about how digital annotations have the potential to create a new kind of manuscript edition. Nevertheless, the availability of manuscripts in digital form does not equal accessibility. There is a need to address the potential skills gaps of researchers wanting and needing to engage with manuscripts through IIIF viewers. Dauvit Broun ended the session highlighting that we are now more likely to want to visit libraries and archives to investigate a manuscript’s materiality, rather than its text. Indeed, the availability of digital images often generates research questions about a manuscript’s codicology, driving us to it, to touch and explore in person.

The panel raised questions from the audience about the future of the traditional print edition of manuscript texts, and there seems to be interest in moving towards sharing this research in different ways. So there could be potential for sharing annotations as open data, or publishing in new digital formats, like the examples from the White Rose University Press.

On Wednesday I attended another workshop-style session, led by David Joseph Wrisley and Gustavo Ariel Fernandez Riva, who introduced some digital tools for textual analysis of corpora. Their project Open Medieval French collects and shares plain text versions of works in medieval French for scholarly, computational research. They demonstrated Transkribus, a text recognition software powered with ‘deep learning’. This means that once a certain amount of transcribed textual data are input, the software can create a model that identifies handwritten or printed characters, and you can thereafter train the model to learn and improve its accuracy of transcription for you. Fairly impressive stuff, and this is enabling the Open Medieval French project.

The reasons for creating open corpora are the same as for open research in any discipline, and include access, reusability, reproducibility, and the flexibility of having different versions of data coexisting. But there are also the same issues about sustainability and the legality of sharing openly.

This IMC I found myself between my research background in medieval studies and my work in open research for the Library. So it was great to see that as things develop in both spheres, they continue to overlap, and we can learn from one another.