In today’s post for International Open Access Week we explore the value of Wikipedia and Wikimedia Commons for exposing University collections to a wider audience, whether research articles, data or Special Collections.

Thanks to Richard Nevell at Wikimedia UK for his input to this post.

So much of the discussion around open access is focussed on compliance that it’s easy to lose sight of the more noble ambitions of OA, to democratise knowledge by ensuring that primary research is freely available to all. To inform the global public no less!

Like an individual vote in a referendum, uploading a green version of your article or dataset to an institutional repository might not seem to make much difference, yet its scientific rigour, academic objectivity or sociological insight incontrovertibly contributes to the digital global commons.

Making your work available online is only the first step in helping the right audience to find it, an “audience” that might no longer even be (only) human, and it is increasingly important to ensure that both you and your work are networked online, using persistent digital identifiers for example.

According to data from Crossref, Wikipedia was the sixth referrer of DOI clicks in 2015/2016 and, as of 18th October 2017, 1004 DOIs associated with the University of Leeds (978 articles / 26 books / 4 chapters) are cited across 1197 individual Wikipedia pages (thanks to Terry Bucknell of Digital Science for kindly supplying this data).

In a previous post we discussed adding repository links to cited sources in Wikipedia, in addition to the DOI (N.B. I have since been informed that I should use the archiveurl | archivedate protocol, though there seems to be some disagreement about how best to add repository links discussed here on WikiProject Open).

In any case, the University of Leeds has very nearly 1000 publications cited across 1157 pages* yet a search reveals a mere 96 links to records in WRRO – interestingly there are also 155 links to PhD theses in WREO. As both repositories are shared services across the Universities of Leeds, Sheffield and York, the numbers specifically for Leeds outputs will be lower still.

* I’ve discounted books as these aren’t necessarily directly associated with Leeds i.e. can be a reference to a chapter within a book to which a Leeds author has contributed a different chapter.

Despite these relatively low numbers, referrals from Wikipedia are significant for both WRRO and WREO, being the 17th and 19th top referrers respectively:

Given the immense potential value of OA links to Wikipedia and the inevitable frustration of paywalled DOIs it seems clear that we should encourage contributors to include legitimate links to OA versions where possible (without replacing the DOI or other link to the version of record). However, given the scale of the issue might there be an opportunity to leverage the Jisc supported CORE aggregation service, for example, which will potentially provide OA links to documents from the global repository network?

Wikimedia Commons is a repository of openly licensed media files – images, video and audio – for use in education and, like Wikipedia itself, anyone can upload or edit material. It also makes is very easy to embed media files across Wikimedia projects. 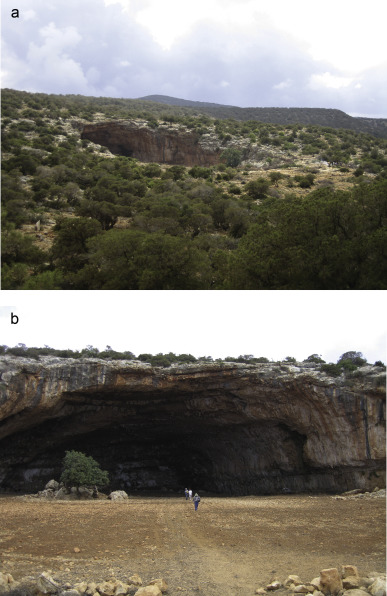 According to Wikipedia, Haua Fteah is a large karstic cave located in the Cyrenaica in northeastern Libya. The page includes a section on stratigraphy and layout of the cave which cites a 2014 article archived in WRRO – the affiliation is York rather than Leeds but the global digital commons is obviously bigger than any one institution or repository! The article is published OA on the publisher’s own site so there is no need to add the WRRO link, the DOI provides full access to everyone. As the article is CC-BY, we can use an image of the cave from the paper to illustrate Wikipedia, and the easiest way to do that is from Wikimedia Commons – also embedded here.

Using its DOI a dataset can of course be cited in Wikipedia in exactly the same way as a journal article or it might provide a unique source of additional material as in the case of Hugh Davies.

To quote Wikipedia once again, Hugh Seymour Davies (23 April 1943 – 1 January 2005) was a musicologist, composer, and inventor of experimental musical instruments. He has also been the subject of extensive research by Leeds academic Dr James Mooney.

On Saturday 17 October, 2015 a concert of music composed by, or in response to the work of, Hugh Davies, was staged at the Clothworkers’ Centenary Concert Hall, including a pre-concert talk by Dr Mooney which has been preserved as a dataset in the Research Data Leeds repository (https://doi.org/10.5518/57) and which is included on Wikipedia as an external link.

In truth research data often is spreadsheets or other forms of numeric or textual data, however, as in the case of this one off concert footage, it can also comprise all sorts of rich media material that can be uploaded to Wikimedia Commons and embedded in Wikipedia with a suitable citation. Baxter, for example, is an industrial robot also used in robotics courses at Universities including Leeds.

Natural Language Acquisition and Grounding for Embodied Robotic Systems is a conference paper presented at the Thirty-First AAAI Conference on Artificial Intelligence in San Francisco. The associated dataset (https://doi.org/10.5518/110) includes videos of Baxter manipulating different objects which can be uploaded to Wikimedia Commons under the terms of CC-BY, with a full citation, and used to illustrate the Wikipedia page using a single line of embed code.

Leeds University Library is the only library to have as many as 5 Designated collections. Designation status is a mark of distinction awarded by Arts Council England to outstanding collections of national and international importance held by non-national institutions. One of these is the Cookery Collection, currently on display in the Treasures of the Brotherton Gallery and the first to have its very own Wikipedia article created as part of a Wikimedia internship run by Special Collections in 2016-2017.

At Leeds University Library, our exploration of the potential of Wikimedia projects is at an early stage. Nevertheless we recognise their immense potential to share information with the world.

In the future we would like to organise an Edit-a-athon, related to another designated collection perhaps, or around a particular discipline where there is established expertise at the University of Leeds.

3 thoughts on “Open in order to…contribute to the global digital commons: University collections and Wikimedia”